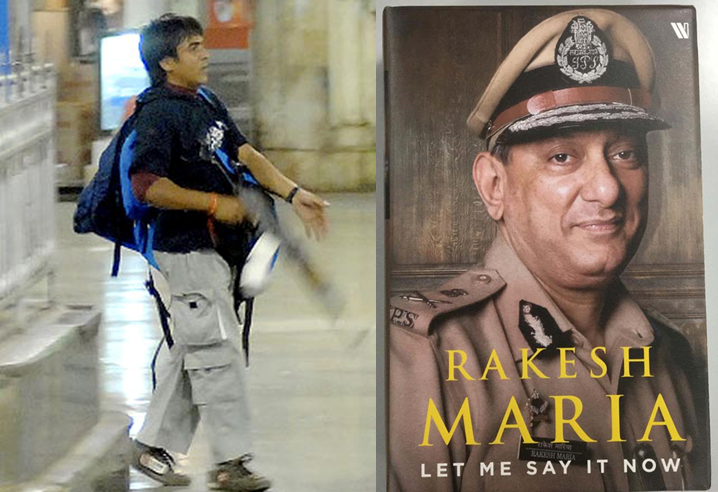 Former Mumbai Police Commissioner Rakesh Maria has made several revelations about Ajmal Kasab, a terrorist suspected of a Mumbai terror attack. Former Mumbai Police Commissioner of Police Rakesh Maria has claimed that terrorist Ajmal Kasab was given Rs 1.25 lakh before the attack so that he could marry his sister. He was also told in Pakistan that Muslims were not allowed to offer prayers in India, which he was surprised to see later.

Police officer Rakesh Maria has claimed through his book that Kasab did not initially participate in Lashkar-e-Taiba. The terrorist Kasab had joined the Lashkar for looting and had nothing to do with jihad. However, such education was given so that Kasab believed that Muslims in India were not allowed to offer Namaz.

Maria mentioned in the book that Kasab was shocked when he was given a visit to a mosque near Metro Cinema. He could not believe that Muslims in India read Namaz, because he was told to the contrary. According to the former police officer, Kasab was given a week off and Rs 1.25 lakh before being sent on a mission to attack Mumbai. Kasab gave that money to his family for his sister’s wedding.

Former Mumbai Police Commissioner Rakesh Maria has claimed that Lashkar-e-Taiba killed 26/11 Mumbai terror attack as ‘Hindu terrorism’ and killed Pakistani terrorist Mohammad Ajmal Kasab as Sameer Chaudhary of Bengaluru Had planned to go. Maria, in her memoir ‘Let Me Say It Now‘, released on Monday, referred to her investigation into the 26/11 Mumbai attack. That attack was planned by Lashkar and it was also known that Pakistan had a hand in it.

As per the excerpts from the book, the (Pakistani) ISI and Lashkar were trying to eliminate Kasab in jail itself as that was the key evidence linking the attack to those groups and Dawood Ibrahim’s gang was tasked to eliminate him. Was. Describing the Lashkar’s plan to project the Mumbai terror attack as ‘Hindu terrorism’, Maria wrote, ‘If everything had gone according to plan, Kasab would have died as Chaudhary and for the media attack’ Hindu terrorists Blame it.

He claimed that the terrorist organization had given fake identity cards along with Indian addresses to the terrorists.

Regarding a picture of Kasab released after the terror attack, Maria said, “This was the work of central agencies.” In view of the security, the Mumbai Police tried its best to not reveal any details to the media. In the picture, a red thread was tied on Kasab’s right wrist, which is considered a sacred Hindu thread. This prompted many to believe that the conspirators had tried to portray the 26/11 attack as ‘Hindu terrorism’.

Maria wrote in her book, ‘There used to be huge headlines in newspapers claiming how Hindu terrorists attacked Mumbai.’ Top TV journalists would reach Bangalore to talk to her family and neighbors. But alas, that could not happen was Ajmal Amir Kasab of Faridkot in Pakistan. He also said that the plan was thwarted by Mumbai constable Shaheed Tukaram Ombale capturing Kasab alive.

Significantly, 166 people lost their lives in the 26/11 Mumbai terror attack. At the same time, more than 300 people were injured. In this attack, terrorist Kasab was caught alive and hanged on 21 November 2012.

Enjoy Your Favorite Podcasts From Chrome With PodStation

Aliva Tripathy - July 5, 2020 10:49 AM 0
We are in the new golden age of podcasting and right now we all have a favorite or perhaps a favorites list. The variety of...

CRPF Convoy Attacked With IED in Pulwama, Jammu and Kashmir, 1...

‘The Vast of Night’: cult science fiction that makes up for...

Santosh Kadam - June 14, 2020 8:01 PM 0
He has been commenting on the internet for a couple of weeks without rest (since it premiered in the United States on Amazon prime...

Review: “The King Of Staten Island” Comes To Vod

Santosh Kadam - June 12, 2020 11:17 PM 0
Pete Davidson is an adult who refuses to mature in director Judd Apatow's most emotional film to date. Early in his filmography, Judd Apatow (Funny...

‘The Vast of Night’: cult science fiction that makes up for its lack of means with a fascinating story about alien invasions

He has been commenting on the internet for a couple of weeks without rest (since it premiered in the United States on Amazon prime...
Read more

Review: “The King Of Staten Island” Comes To Vod

Pete Davidson is an adult who refuses to mature in director Judd Apatow's most emotional film to date. Early in his filmography, Judd Apatow (Funny...
Read more

India in Top 10 List of Coronavirus Infected Countries, Know Which State Contributed Most To Achieve This Shameful Trophy

The pace of corona infection in India is now beginning to scare. India has ranked tenth in the list of countries with the highest corona...
Read more

Is Pankaja Munde preparing to bring an earthquake in BJP?

MUMBAI: Is Pankaja Munde in the process of bringing political turmoil in Maharashtra BJP? Is Pankaja going to any party other than BJP? Is...
Read more

Panipat: The Great Betrayal 2019 has been in news before its release and most topped pirate sites like Tamilrockers, Cinevood etc. were eyeing on...
Read more

Video of a Gang Attacking a BJP Candidate in West Bengal...