Prime Minister Narendra Modi, in his aggressive and sarcastic style, kept the facts in such a way that the hands of the Congress became numb and the lyrics changed. 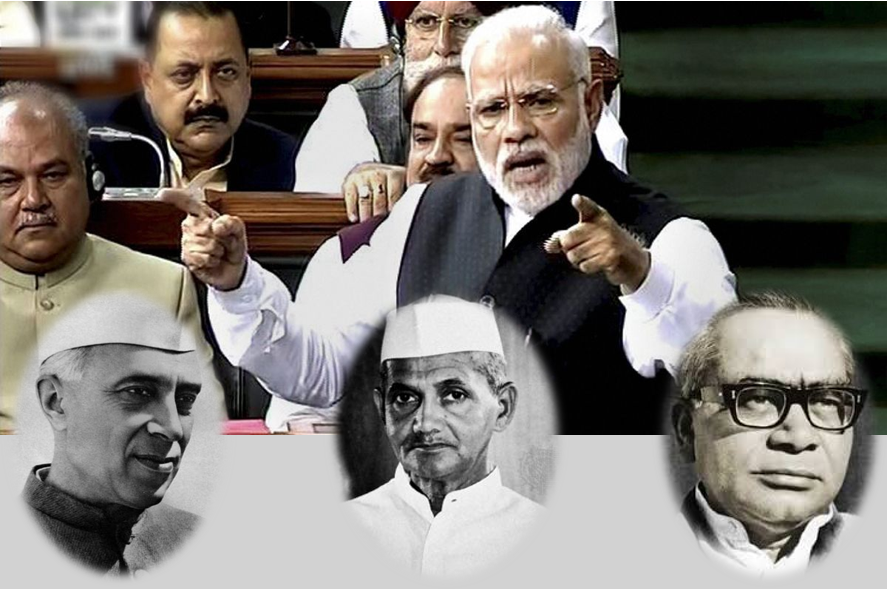 The opposition of the opposition, which has been barricading against the CAA for a month, received a major setback on Thursday. Equipped with data, Prime Minister Narendra Modi, prepared with the earlier statements of Congress and Socialist veteran leaders, put the facts in his aggressive and snappy manner in such a way that the Congress’s hands and feet became numb and the lyrics changed. The Congress, which had been opposing the exclusion of Muslims from the Citizenship Amendment Act, said – their opposition was only because countries like Nepal and Sri Lanka were not included in it. Rajya Sabha Leader of Opposition Ghulam Nabi Azad said this inside the House on behalf of the entire opposition and then went out before the opposition passed a resolution to send a vote of thanks to the President. In such a situation, it should be assumed that the opposition’s allegation of CAA being anti-Muslim has almost collapsed. Now the opposition will have to find a new way.

It was only after Dr. Manmohan Singh’s statement to Yun in the past, the proposals of the committee headed by Pranab Mukherjee that the Congress realized that the ground of CAA protest in the name of Muslim is brittle. However, this protest was going on, but on Thursday, when the Prime Minister started to open the pages of the history of the Congress, the tongue of the Congress leaders got stuck. Prime Minister Modi, who came to answer the discussion on the President’s address in both the Houses, put forth the fact of the proposals of Jawaharlal Nehru, Lal Bahadur Shastri, Ram Manohar Lohia, Congress Working Committee, which was the squeeze that oppressed the minority Hindus in Pakistan and Bangladesh. Going and giving them citizenship in India is a moral duty.

Referring to the Nehru Liaquat Agreement of 1950, the Prime Minister said in the Lok Sabha that it talked about the security of the Minority of India and Pakistan. Modi asked the question- ‘There must have been some reason that Nehru agreed to the word Minority. Why didn’t they talk about all the citizens? Were they communal? ‘ Modi said tauntingly – I know that you will also leave Nehru for political gain if needed but even before the agreement, Nehru wrote a letter to the then Chief Minister of Assam Gopinath Bordoloi and said – ‘You Hindu refugees and Muslims One has to differentiate between immigrants and the country must take responsibility for these refugees. Later on 5 November 1950, Nehru said in the House that – “Those affected who have come to India to settle, these people are entitled to citizenship and if the law is not favorable then the law should be changed.”

In the Rajya Sabha, Modi quoted Shastri’s statement made in 1964, in which he had expressed concern over the atrocities with Hindus in Bangladesh and said that it seems that all minorities will be excluded from the Islamic country of Bangladesh. Modi also reminded socialist leaders that they should respect Lohia’s statement. Modi also referred to the proposal of the Congress Working Committee of 25 November 1947 which said – ‘We will provide security to all non-Muslims coming from Pakistan.’ Modi questioned the Congress leaders who were seen in the silence with the new facts, why did the Congress not talk about Naan Muslim instead of all the citizens coming from outside? When these facts were being kept from the pages of history, it could be seen clearly on the faces of the leaders of the opposition that they were looking for a way to a new strategy.

The matter did not stop here. The Prime Minister also raised questions about the opposition’s opposition on NPR and the opposition’s support of Shaheen Bagh’s performance. Quoting the statement of the Chief Minister of Kerala, he said that if the Chief Minister is seeing the hands of some activists in the demonstrations happening there, then what support for the demonstration in Delhi is not a double character. NPR started in the Congress era itself in 2010 and now it is being opposed. The Prime Minister challenged that he had the entire outline of the NPR of the Congress era. There is complete data and on that basis everyone was benefited. Rather it is being updated so that everyone benefits. But due to petty mentality, opposing such work only for protest is not good for the country.

Shocked Everyone With New Facts

During the whole speech a little hindrance did happen, but usually the new facts surprised everyone. The opposition had no reason to cut it. This was clearly shown in the Rajya Sabha when after the speech was over, Azad said that he is saying from the Congress and the entire opposition that Hindus coming from these countries are welcome, our only opposition is that it includes Sri Lanka, Nepal like Why countries were not added. The Opposition walked out of the House even before the vote of thanks could be voted on.