The latest example of how social media is becoming a trouble for people is also seen in Delhi violence. The case of Shahrukh, the young man who became the most talked about face after firing publicly during the Delhi violence, reached the Varanasi police station on Thursday. When it was claimed on social media that the person who fired the gun and fired at the police constable in Delhi violence was not Shahrukh, but Anurag Mishra. In fact, a video on TV channels during the violence in Delhi on Monday shocked everyone. Shah Rukh was wearing bullets in a red T-shirt. He was somehow identified, but still he is out of the police’s grip. Police sources said that Shah Rukh is still absconding and his search is on. 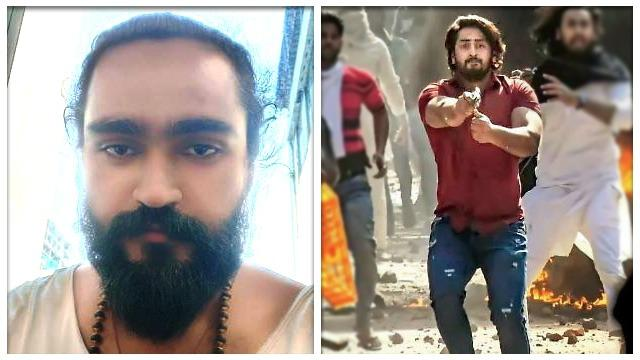 Anurag Mishra’s name became viral on social media due to his face resembling Shahrukh. It was claimed that the young man was not named Shahrukh, but Anurag Mishra. Some channels also showed viral pictures of Anurag Mishra on social media. Anurag Mishra, whose Facebook account was taken here, when he came to know about this from his friends, the ground slipped under Anurag’s feet.

Anurag Mishra, a resident of Silvassa, Dadra and Nagar Haveli, is currently in Varanasi to attend the UP International Film Festival. Actor Anurag Mishra by profession arrived at Sigra police station on Thursday (27th February) and while applying to the police, told that he has stayed in the hotel here since February 19 in connection with the film festival. It was received from friends that a Facebook ID has been created in the name of Anurag D Mishra. Editing photos from his Facebook account is being viral on social media with a photo of a young man firing during a riot in Delhi. People are proceeding without checking the post, saying that the accused of firing in Delhi riots and spreading violence has been identified as Anurag Mishra. Anurag appealed to the police for protection, fearing mischief. The police have investigated and assured of action. Earlier on many Facebook many people claimed through fake photos that Shahrukh Anurag Mishra is the one who shot in Delhi violence. One user wrote – ‘Shah Rukh to Anurag Mishra. The Islamophobia view of the police and the media was there, propaganda was created. While the reality has come out that the person who shot during the violence in Delhi’s Zafarabad is not Anurag Mishra, but Shah Rukh, whom the police are still looking for. After investigating the viral picture, Anurag Mishra has also thanked Hindustan newspaper for exposing the truth. Anurag wrote on his Facebook – heartfelt thanks to Hindustan News Paper. All people should support the truth in this way.

Explain that there was violence between two communities in Delhi violence over the Citizenship Amendment Act. Around 38 people have died and more than 200 people have been injured in violence in different areas of North East Delhi on Sunday, Monday and Tuesday. Apart from Ratanlal, head constable of Delhi Police, an IB officer Ankit Sharma has also been killed in this violence.

Vikas Dubey Killed In A Police Encounter, Tried To Run Away With A Weapon

Can Coronavirus Change The Asian Culture Of Consuming Wild Animals?

Scientists believe that the life-changing coronavirus of billions of people worldwide emerged at a wildlife market in the Chinese city of Wuhan, where bats,...
Read more

Washington. The US has approved the sale of 13 MK-45 naval guns to India. It will cost Rs 7100 crore with all the equipment....
Read more

These Two Boys Made Prank Call In The Name of Her...