Retail chains, markets and other manufacturers in Serbia are now able to donate food to those who need it the most with the help of a new app. So the poor can get help – with one click.

A non-profit association “Donorum” , which consists of eight young innovators, the last year has made application “Pablik ornate infrastrakčer” (Public kitchen infrastructure), which allows companies that produce, process or sell food that is donated, and those who need the food most, that they get it at a charity that uses the app. So far, there are four of them, including Cinderella from Grocka and Rainbow from Novi Sad. 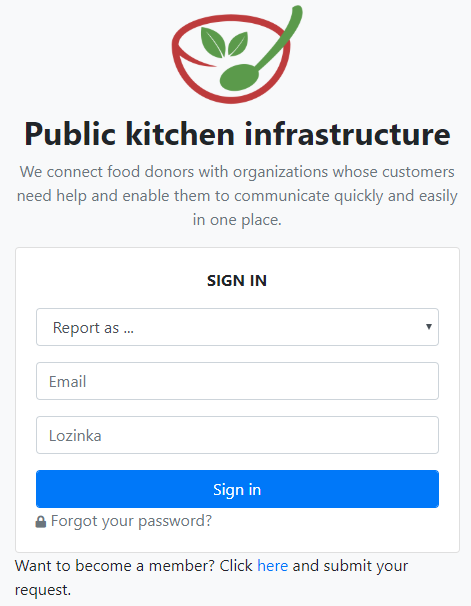 The app donates food to the poor

The procedure is simple – after companies and charities register with the application and the association verifies their information, donation begins. The donors enter into the application what they donate, how many pounds, in what packaging, the shelf life of the product… Humanitarian organizations then choose what they need, the parties confirm the transaction, so the food can be downloaded and distributed to the socially disadvantaged.

“Our long-term plan is for large food delivery companies to include donations on their routes,” says Gordana Jovanovic, Donorum manager.

Currently, the application can only be accessed through computers , but the association hopes to provide the means in the future to allow the application to work on mobile phones as well. Still, it’s just a small stumbling block in the path of a donor-charity.

” If you want to donate a product, food or clothing worth over 5,000 dinars, you have to pay a tax of 25 percent,” our interviewee said.

Food waste is punished across Europe

She adds that supermarkets throw away products , such as fruits and vegetables, although they are still usable.

“Supermarkets are not penalized for destroying food. In France, as of 2016, you can be fined up to € 75,000 if you do not donate food on a daily basis, ”Jovanovic explains.

According to the United Nations, cited by the Donorum Association, Serbian households throw away about 250,000 tons of food a year . Bread, fruits and vegetables are mostly thrown away.

“We do not have data on how much food is thrown from industrial plants per year. The process of destruction is expensive. It is considered that 12 to 18 dinars are needed to destroy a kilogram of food, ”says Jovanovic.

So far, they say, Serbian companies have mostly donated . Donorum is negotiating with larger market chains to start using the app as well. The goal is humane and the association young, so they hope for new collaborations. But also better law.

First Human Tests Of Possible Treatment Against Covid-19 Are Done

How Does A Lack Of Vitamin B12 Affect People With Diabetes?

Dr. Bhavna Patel - Modified date: June 4, 2020 9:04 PM 0
Vitamin B12 deficiency occurs due to the mechanism of action of metformin, a drug that helps balance glucose levels. Vitamin B12 occurs naturally in foods...

Understand Racism and Protests In The United States Through These 9...

How To Disinfect Your Mobile

Chagala Tripathy - Modified date: June 4, 2020 7:18 PM 0
The initial approach of 'Inhuman Resources', a six-episode miniseries released on Netflix , is shocking. Drinking from the most committed social cinema, it brings together denunciation, thriller and judicial...

The 90-Year-Old Practitioner From Gujarat, India, Who ‘Didn’t Eat Or Drink...

Life With 4 Children Of The First Pregnant Man In The...

The Story Behind the Touching Viral Photo of a Woman on...

The initial approach of 'Inhuman Resources', a six-episode miniseries released on Netflix , is shocking. Drinking from the most committed social cinema, it brings together denunciation, thriller and judicial...
Read more

'The Vast of Night', Andrew Patterson's first feature film, original from Amazon, places us in a small town in the state of New Mexico. Early 50s,...
Read more

The medical reporting application related to the Covid-19 epidemic reached one million downloads and more than 500 thousand declarations after nearly 10 days of...
Read more

How to Gain Wealth According to Your Zodiac Sign in 2020

Getting rich is the most common desire in the modern world. That is why today we will tell you how to attract wealth in accordance...
Read more